Posted on January 3, 2017 by basfordianthoughts 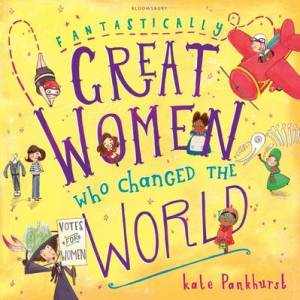 E received a book for Christmas called Fantastically Great Women Who Changed the World by Kate Pankhurst (yes a descendant). It tells the story of some pioneering women who made changes for the good – including Jane Austen, Coco Chanel, Mary Seacole and E’s favourite, Mary Anning. To make sense of why they changed the world you have to start by explaining what was wrong in the first place. It starts off making a bit of sense – in Jane Austen’s day women didn’t really get to work and weren’t allowed to write books (I realise this is women of a certain class but one thing at a time eh?) but soon descends into nonsense. Women weren’t allowed to wear trousers? Chanel. Women weren’t allowed to vote – why? Because they were not seen as educated enough and too emotional. Pankhurst. Black women (and men) weren’t allowed to sit on the bus? Rosa Parks. Women (and men) had to hide behind a bookcase because they were Jewish? Anne Frank. Boiling it all down to terms a four year old can understand brings out the pettiness and stupidity behind much of this. Yet, I read somewhere that it’s best not to bring children up blind to difference but to talk to them about discrimination and to recognise it so they can help do something about it. This is a good start. Buy the book – it’s really good.

But sometimes you get bored of explaining the good fight. Sometimes you really want to be treated equally. Which brings us to the next thing. E and I celebrated the end of school and work by going to the cinema to watch Moana. I’d heard good things about it. It’s hard to say which of us loved it more – it’s packed with great songs and humour. But there was more. In so many books with female protagonists the main storyline, the main challenge, is a girl wanting to do something and being told she can’t because she was a girl, because she had to get married, because she has to look after her ageing parents. I was so disappointed in the new Julia Donaldson ‘Zog and the Flying Doctors’ when Princess Pearl is told she can’t be a doctor because she’s a girl, despite having proved herself. She has to prove herself again before she’s allowed.

Moana doesn’t have any of that. She’s the daughter of the village chief and he happily brings her up to be the next chief and leader. There’s no nonsense about her not being able to do anything because she’s a girl, the challenge is for her to sail beyond the island into the open ocean. A challenge, because that’s not what her people have done for a long time, not because she’s a girl. In short, she’s treated like you would a male character, a person, a human being – with universal experiences and issues. Yes, there’s a subtle gender thing going on – the conflict in the film results from the actions of men (or demi gods) and is resolved by women – but this is a minor detail and you’re not hit over the head with it. The film is better for it. And it’s got great songs. Did I mention the great songs?

What we need is more examples of women doing things men do, just doing it. Which is why I was so pleased to learn about I Am Elemental action figures. Started by an American mum who was concerned about a lack of female role models, I Am Elemental are series of action figures, female superheroes, that all embody aspects of Courage, Wisdom or Justice. I got E Persistence and Bravery from the Courage series as Christmas presents. She easily accepted that they were female superheroes – why wouldn’t she? women can do anything in her world – and spent much of Christmas afternoon using them to defeat the Stormtroopers she got in a set of Star Wars figurines.

The figures come with a shield, two swappable cards and an element poster to put on your wall, as well as a little bag for the figures to go inside. Ours are too busy kicking ass to get inside the bag yet. I got my figures sent to me from After Alice, a new website designed to provide toys and gifts for girls – check them out, they’ve got some really good things on there.

I can’t write a blog post about great role models for women and girls without mentioning the deaths of Carrie Fisher and Debbie Reynolds. They both found fame with roles played when they were 19 and both made it because they regarded themselves, and acted as absolute equals with older and more experienced men in their casts. As they should, you’d say, but not everyone has the balls to do that. As a result, both women shone on the screen and provided so much joy and inspiration for generations of women, me included, and my daughter too. On the morning of Debbie Reynolds’ death, I sat and showed her some of the dance scenes from Singin’ in the Rain which she loved. And of course, we both love Princess Leia. Carrie Fisher was more than that though, as you’ll know, she was a mouthy advocate of a woman’s right to say, do and look whatever the hell she wants.

Bless you both, and thank you.

Not necessarily about books or coffee.

Writing to make sense of life

On publishing, clients, writing, and queries

my little corner of the internet

The Writes of Woman

A celebration of female writers and their work.

Rants and rambles about a mom's life

Don't look like much here, but we have everything

Thinking about culture as if people mattered

Did You Ever Stop To Think